Wow.
This is such a great book and unique concept for a story... 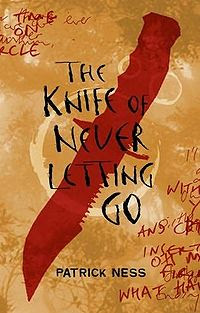 What a cliffhanger ending...jeebus!  I don't think I can avoid reading this whole series ASAP.

Summary from Booklist:
Chased by a madman preacher and possibly the rest of his townsfolk as well, young Todd Hewitt flees his settlement on a planet where war with the natives has killed all the women and infected the men with a germ that broadcasts their thoughts aloud for all to hear. This cacophanous thought-cloud is known as Noise and is rendered with startling effectiveness on the page. The first of many secrets is revealed when Todd discovers an unsettling hole in the Noise, and quickly realizes that he lives in a much different world than the one he thought he did. Some of the central conceits of the drama can be hard to swallow, but the pure inventiveness and excitement of the telling more than make up for it. Narrated in a sort of pidgin English with crack dramatic and comic timing by Todd and featuring one of the finest talking-dog characters anywhere, this troubling, unforgettable opener to the Chaos Walking trilogy is a penetrating look at the ways in which we reveal ourselves to one another, and what it takes to be a man in a society gone horribly wrong. The cliffhanger ending is as effective as a shot to the gut.

I've heard so many great things about this series (and the premise was so intriguing) that when trying to decide what to read next, this was the first book that popped into my mind.  The story is told from Todd's perspective and in his own voice - which is one of my favorite things about the book.  Todd is an incredibly endearing character and has such a colorful way of describing his world and the Noise.

You will feel deeply for Todd and his companions as they embark on this hair-raising adventure.  It'll make you laugh, raise your eyebrows, and if you don't get a little misty-eyed at least once...you may want to get your tear ducts checked out.  There are some great themes in this novel: hold onto hope in impossible situations, that prejudice is dangerous and can be used as a weapon, and that communication goes beyond what you can hear.  That's really all I want to say because I don't want to spoil any of the plot...it's best that readers discover things as Todd discovers them.  Oh, but please read this book - and then read the rest of The Chaos Walking Trilogy (as I plan to do).

**Sidenote: while this is a YA novel, be advised that - no matter the reading level of your youngin' - it should probably only be recommended to mature teens and up.  There is quite a bit of graphic violence and a smidgen of language (mostly Todd saying "effing" but the actual "f-word" does make an appearance along with a few other swears).